Many people think of shorts as practice drills or dress rehearsals, something done by an aspiring filmmaker. Obviously, the goal is to make real films, right? These shorts are meant as demo reels, business cards, or experiments – they might be considered juvenile or proof-of-concept models, but not exactly real movies.

That’s my bias, at least, although I know some very serious filmmakers who work entirely in the short film genre because that’s how they want to tell their stories. I feel that way even though I know the 90 minute or 2 hour movie convention has more to do with theaters wanting/needing to maximize audience churn than any artistic goal. Some 3-minute films are completely complete. Most movies I see are at least a little too long.

All 15 Oscar-nominated shorts are in theaters today. Three programs – live action, animation and documentary – each over the duration of a conventional film. You can buy one ticket and watch one of the five nominees, or buy three tickets and watch them all. It’s a bargain and a great experience, especially for 2021, which has produced an interesting and somewhat atypical list of Oscar hopefuls.

Usually, documentary shorts are as dark as they are rigorously made – but this year they are generally uplifting. And the Academy has attached a warning label to this year’s animated program – they want you to know that this is not a selection of films aimed at children as most have been. years past. Only Aardman Animations’ “Robin Robin” stop-motion story, directed by Dan Ojari & Mikey Please, about a baby bird adopted by a family of mice, is suitable for very young children. (It’s a very sweet film, and probably the favorite to win, given that it features the voice talents of well-known actors, including Gillian Anderson and Richard E. Grant.)

On the other hand, the 15-minute Chilean stop-motion film “Beast” aka “Bestia”, by Hugo Covarrubias, explores the conflicted life of Ingrid Olderock, a particularly vicious secret policewoman working under the dictatorship of Augusto Pinochet. .

Olderock, the daughter of German Nazi sympathizers who fled to Chile after the war, spent her life psychologically terrorizing female prisoners, training dogs to sexually assault them. Covarrubias said that while Olderock was a historical person, his film “is psychological fiction, where we go into his mind and try to show how all these mental disorders end up representing an entire country. The trauma of a country [is seen] through the evil that this woman represents.”

Just so you know, it’s not “Bambi”. (Which is actually a very dark story – the original novel being even darker than the Disney cartoon.)

And Spanish animator Alberto Mielgo’s “The Windshield Wiper,” also around 15 minutes long, is a moving and surprising work about the nature of love that features male and female nudity, sex, and adult themes. (And is one of my favorites from this year’s crop of nominees.)

Hand-drawn “Boxballet” by Russian director Anton Dyakov, is an eerily funny riff on “Beauty and the Beast” that depicts the romance between a naïve, tricky dancer and a rough boxer. “Affairs of the Art” is a British-Canadian production, a sort of sequel to the 1987 animated short “Girls Night Out”, https://www.arkansasonline.com/news/2022/feb/25/15 – Oscar-nominated shorts/”Body Beautiful” (1990) and “Dreams & Desires: Family Ties” (2006), all of which feature the working-class character Beryl and her family. In this episode, middle-aged Beryl decides to be an artist and takes up drawing to hilarious effect. It contains nudity and a wonderfully wicked taxidermy scene.

The live-action program features the dystopian black comedy “Please Hold,” from Los Angeles-based filmmakers KD Davila and Omer Levin Menekse, about a young Hispanic man mistakenly arrested by a police drone and held in a fully automated prison without any means of appeal; actor-rapper Riz Ahmed in Aneil Karia’s “The Long Goodbye,” a film made to accompany Ahmed’s concept album inspired, in part, by the rise of far-right political groups and anti- immigration in post-Brexit Britain; “Ala Kachuu (Take and Run)”, a 38-minute Swiss short film directed in 2020 by Maria Brendle, about an ambitious Kyrgyz woman who is kidnapped and forced to marry a stranger; “The Dress” (aka “Sukienka”) by Polish director Tadeusz Lysiak, about a disabled maid working in a run-down motel who craves love and intimacy; and “On My Mind,” a Danish film about love, loss, longing, and the healing power of karaoke by Martin Strange-Hansen.

Netflix nabbed three films in the short documentary category: “Audible” by Matthew Ogens and Geoff McLean, which follows a deaf high school football player and his classmates through their senior year; “Lead Me Home” by Pedro Kos and Jon Shenk, a poignant and majestic film that highlights the vastness of homelessness on the West Coast; and Afghan filmmakers Gulistan and Elizabeth Mirzaei’s “Three Songs for Benazir,” which follows a young, newly married Afghan refugee living in a Kabul displaced persons camp. Rounding out the program are Ben Proudfoot’s “The Queen of Basketball” about Lusia Harris, who scored the first basket in women’s Olympic basketball and was drafted into the NBA; and Jay Rosenblatt’s “When We Were Bullies,” which chronicles the filmmaker’s efforts to reunite with his fifth-grade class and teacher to re-examine a 50-year-old bullying incident.

Over the past 35 years, Joanna Quinn and Les Mills have made four animated shorts about their fictional character Beryl, a daring working-class Welsh housewife with artistic ambitions. Their latest, “Affairs of the Art”, is nominated for an Academy Award. 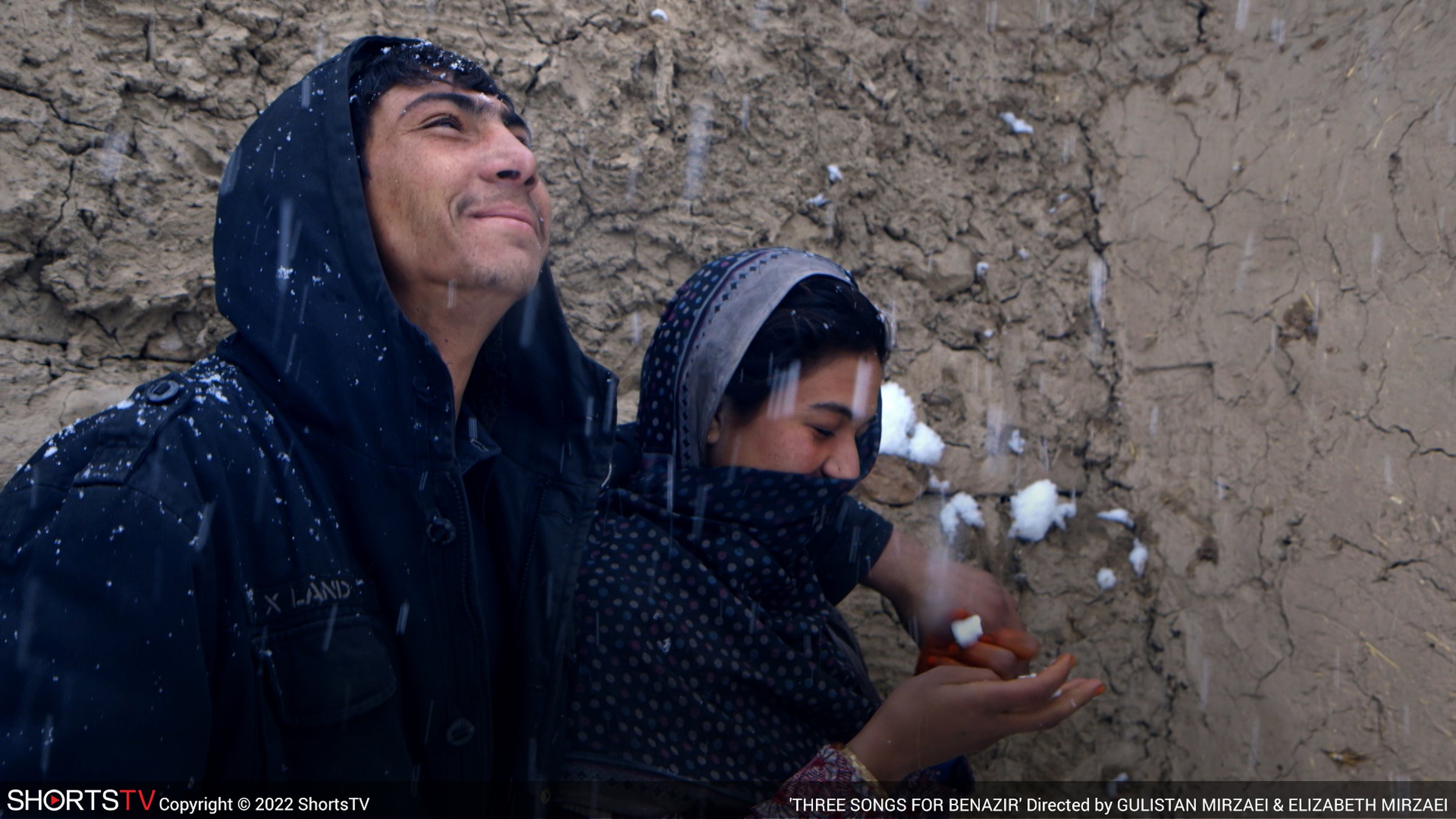 The Oscar-nominated documentary short ‘Three Songs for Benazir’ follows Shaista, a refugee married to Benazir and living in a camp for displaced people, as he tries to become the first member of his tribe to join the army. Afghan national.