A genre historically dominated by men, there has always been a dearth of meaty female roles in musical theatre. In the second half of 2021, six out of 41 musicals featured female leads, with only one having an all-female cast.

Meanwhile, musical theater audiences continue to be predominantly female. In 2022, the search for premises ticketing platform Interpark, 75% of spectators were women.

Performances this spring season see the industry warming up to more female-centric narratives as two musicals “Lizzie” and “Frida,” both with all-female actors, opened last month in Seoul.

The plot is based on the real life figure of Lizzie Borden (1980-1927) and the infamous 1982 ax murder case of her father and stepmother in Fall River, Massachusetts. 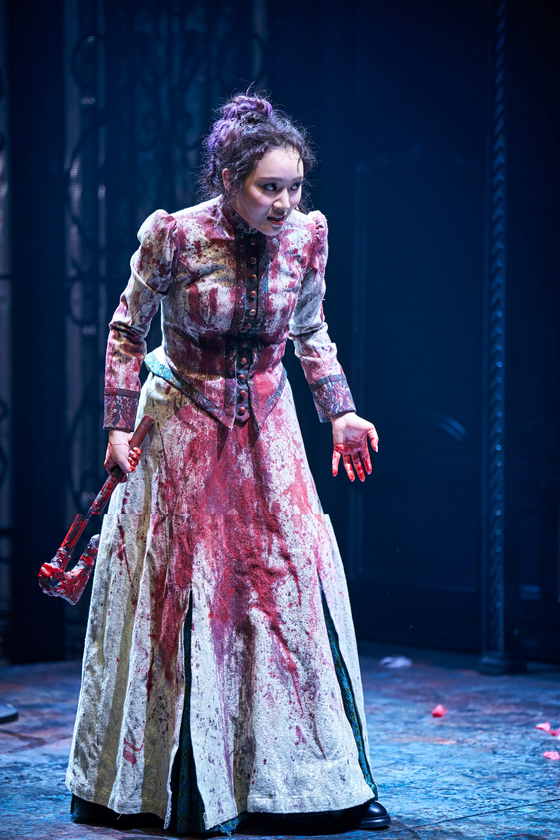 Actor Lee So-jung as Lizzie during a scene from the musical “Lizzie” in Jongno district, central Seoul [SHOWNOTE]

The musical, for the most part, stays true to the actual events. The rest of the characters – Lizzie’s older sister, Emma Borden; Borden family maid Bridget Sullivan; and Lizzie’s best friend, Alice Russell – are all real personalities who testified at Lizzie’s trial.

However, the show reimagined the century-old tale with modern twists and feminist twists that portray Lizzie as a victim of misogyny instead of an abuser.

The musical also relays the theme of female solidarity which fights against sexist, ageist and homophobic voices in society.

This central message is not only delivered through songs and dialogue, but also through costume changes. It’s truly a cathartic moment as the ladies rip off their pioneering dresses and free their hair from tightly pinned up buns to reflect their darkly united spirits.

The thrilling music and lyrics of Steven Cheslik-DeMeyer and Alan Stevens Hewitt cannot go unnoticed. Incorporating hard rock and soft rock, the numbers can be tender in one scene, then absolutely wild in others. 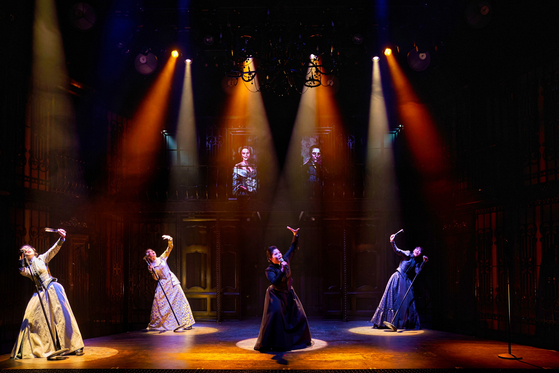 The use of the stand microphone used in the first act is also significant. The image of four women singing the same songs into their own standing microphones scattered sparsely across the stage conveys a sense of common loneliness and pain the characters suffer before reuniting at the end of the show.

The true celebration of their togetherness begins once the show is over.

One of the longest curtain calls in musical theatre, the actors go all out singing all of the show’s signature numbers. And with the audience standing, jumping and cheering, the stage is nothing less than a mini rock concert.

“Lizzie” premiered off-Broadway at the Living Theater in New York in 2009. The show premiered in Korea two years ago. After seeing rave reviews, “Lizzie” is back for a second production with a new 6-piece band performing on a larger stage.

“Lizzie” is performed daily except Mondays at the Doosan Art Center in Jongno District, central Seoul until June 12.

The new musical from one of the country’s most prominent music production companies, EMK, also featured an all-female cast when it premiered last month.

Inspired by the Mexican artist Frida Kahlo (1907-1954), the musical “Frida” recounts the tumultuous life of the artist.

Primarily known for her self-portraits, Kahlo is one of the most celebrated artists today. She has movies, books, museum exhibits — and now, a musical in Korea. The New York Times describes her as “one of the most overexposed artistic figures of all time”.

Its intrigue goes back to its innumerable sufferings.

During her childhood, Kahlo suffered from poliomyelitis and a serious streetcar accident which left her with lifelong disabilities. She twice married muralist Diego Rivera, miscarried and lost her right foot to gangrene. But despite her physical challenges, Kahlo created masterpieces throughout her life.

Covering all of these events and more, the message of the musical “Frida” can be found in the title of Kahlo’s latest painting: “Viva la Vida” or “Long Live Life”.

Thanks to Kahlo’s will to live despite all her conflicts, the show relays the message of celebrating life despite her sorrows and difficulties.

An iconic moment in the series is when Kahlo sheds her corset that supported her weak spine to express her freedom from her physical limitations while giving a nod to the local feminist “escape the corset” movement. 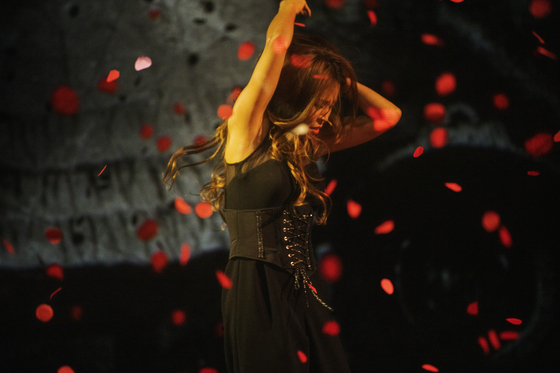 The musical is outside the standard repertoire of musicals in the best possible way.

The whole show is told in the form of a staged interview/music show. Kahlo is on the set of a TV show called “Frida’s Last Night Show” where she recounts her past to a live studio audience.

This unique concept combined with high-tech scenography, a ravishing pop and rock score, chic costumes and special effects that highlight climatic moments make “Frida” one of the trendiest live theater performances in the city. 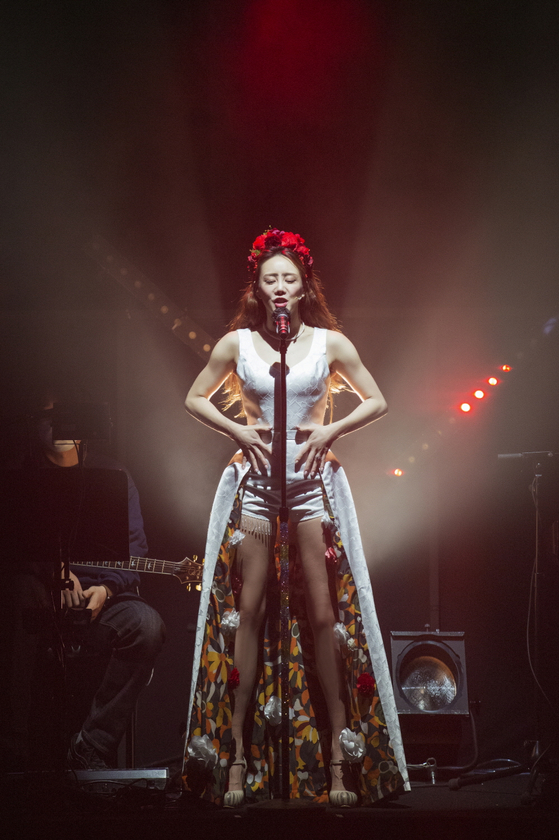 The other roles are the host of the show Reflejar and the inner spirit of the artists Memoria which represents life and Destino which represents death. The three also appear in different roles, including male roles, for different parts of Kahlo’s life. 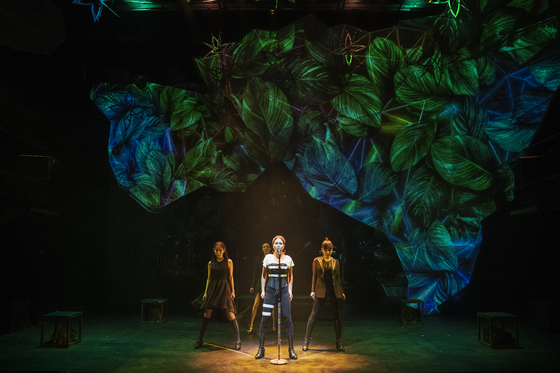 “There were male actors in the early plays, but they were gradually replaced by female actors in the process of the musical’s progress,” EMK music company vice president Kim Ji-won said during the presentation. show’s press conference in March. “Since all four characters ultimately express who Frida is, it made more sense for all the actors to be of the same gender as Frida.”

Being the first production of a new musical, the show lacks in some areas, mainly because it packs so many major events from Kahlo’s life into just 110 minutes.

To move the scenes forward, Kahlo must constantly explain herself – her emotions, the reasons for her actions, etc. — in a flurry of lines that makes the musical feel like an audio-visual book at certain points in the show. Kahlo’s story is not really “felt” by the public.

The first public performance of “Frida” was held at the Daegu International Music Festival in 2020. After receiving positive reviews, EMK took over the official production of the show. It was officially created at the beginning of March.

“Frida” runs through May 29 at the Sejong Center for the Performing Arts in Jongno District, central Seoul.